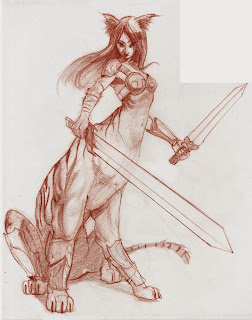 Sometimes the most fierce denizens of a dungeon are the smallest.

The Cat-taurs (a name the Ferrowar loathe) are a clannish breed of fae who dwell in tunnels and caverns laced with magic. They resemble ordinary housecats in shape and size, but in place of a head a humanoid torso with enormous cat ears emerges. In contrast to their drab surroundings, they are striped and spotted with many bright and unusual colors . Along with their sensitive ears, they possess darkvision and move incredibly silently (they gain a bonus to stealth and alertness, however that is handled in the game). They roam the tunnels in packs of 3d6 individuals (1d6 HD), always led by an alpha (2d6 HD) that may be male or female. Their chief weapons are usually bows and spears tainted with a poison that functions as a low level sleep spell. In addition, they possess the remarkable ability to phase through solid walls and floors up to 3 times per day, and have an unfailing sense of direction.

Theirs is a warrior culture, with epic lyrics composed in their caterwauling variant of Pixie to be howled through the empty caverns to distract and disorient their foes. Often, clan members will duel with one another over matters of honor, and it is not unusual to find ronin Ferrowar cast off on their own to wander clanless after some defeat. Their sense of personal honor is vast and volatile, and their word is unshakeable, especially in the case of a life debt. This does not mean, however, that their sense of honor interferes with their strategic judgement. They are great hunters of larger, dumber humanoids, and will not hesitate to track adventurers for days before ambushing them when they have the advantage. Honor shared freely amongst one's own kind is not necessary when one is facing one's enemies. When defeated, the enemies will often be picked clean of shiny objects, and while the Ferrowar do not indulge in the cannibalism of sentient species, they have no qualms about leaving their prey to the mercy of other creatures.


They prefer elaborate multisyllabic names such as Rampolcanther and Pirrowee. They will never consent to being a familiar of any wizard or witch. They worship a petty god called Arihina of the Hidden Moon, who guides them in their hunting and is propitiated with shiny objects dropped in dark underground pools. They purr only in their own company and when about to strike a finishing blow, and this last is said to be a most horrible sound.
Posted by Anathemata at 11/11/2013 08:16:00 PM

Anathemata
I talk about old-school D&D.